The latter part of 2013 is seeing some radical changes to existing marijuana laws in Washington. The most significant new proposals are being made by the Liquor Control Board, which is currently pushing to limit the number of recreational marijuana outlets in the state to 334.

Of this number, ten outlets will be located in Kitsap County. Under the guidelines of Initiative 502, this proposal also aims to establish licensing restrictions for marijuana businesses with the goal of preventing the marijuana industry from falling under the sole control of large commercial entities.

Re-filed on September 4, 2013, the new proposals sought to place a limit on the number of marijuana retail outlets that are allowed to operate in every county. The most heavily populated county–King County–will be allowed to have a maximum of 61 retail outlets, with 21 of them to be located in Seattle. Snohomish County will be limited to 35 retail outlets, and Pierce County will be limited to 31 outlets. As for Kitsap County, the new proposals would limit the number of marijuana retail outlets to two in Bremerton, one in Bainbridge Island, and seven more located throughout the county.

Applications for all marijuana licenses will be accepted by the WSLCB beginning on November 16 for a period of 30 days. The first licenses are scheduled for issuance by December 2013 to January 2014. Because of the large number of applicants, the licensing process is expected to take longer than the standard 90 days. 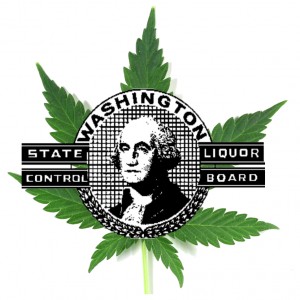 There are currently no plans to limit the number of licenses to be issued, whether for producers or processors. However, there is a plan to limit the production of marijuana in the state to 40 metric tons.

The first version of the proposals was filed by the Washington State Liquor Control Board on July 3, 2013. Based on input from the general public during five public hearings however, the board opted to revise the rules. In a news release published on September 4, 2013, board chair Sharon Foster said that the new rules “fulfill the public expectation of creating a tightly regulated and controlled system”.

If you want to learn more about the cost of running your own legal marijuana business, call us today for some essential tips!