The American Bankers Association (ABA) is reaching out to its members to learn more about their operational struggles working with the cannabis-related industries across the U.S.

Over 30 states in the U.S. have legalized medical or adult-use cannabis in their borders, and the last several election cycles have seen a few more make that decision each time. But the federal-level prohibition on cannabis makes doing business difficult for some, particularly for banks that, to stay in business, must follow strict guidelines that are increasingly unclear. This is a problem when more and more banks are welcoming cannabis-related accounts.

The ABA is over 100 years old and does not have an official position on cannabis legalization. Their stated intent is to gather data that will better showcase to regulators and legislators that clarity is needed on this issue. The survey being put to its many members asks a variety of questions about each bank’s experiences with the cannabis industry.  A few of the questions cover topics like: 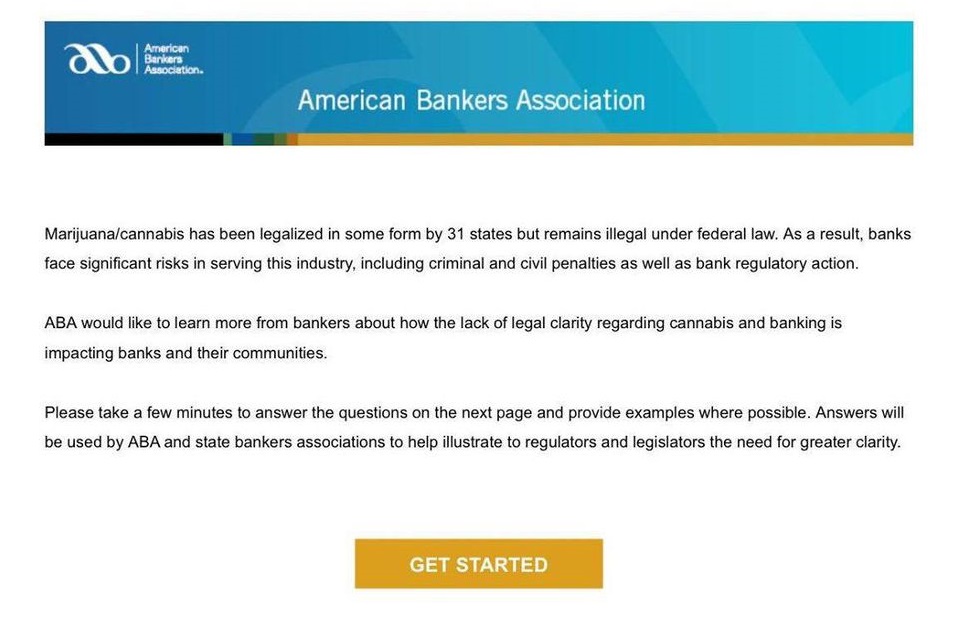 Financial institutions are caught in the middle of what the American Bankers Association’s vice president and associate chief counsel for regulatory compliance called “a classic conflict of laws” between the federal and state governments. Robert Rowe wrote in a recent banking journal about the lack of clarity. Even the FinCEN guidelines don’t provide enough of a path forward, according to Rowe. “One of the first challenges with the FinCEN guidance is that it addresses ‘marijuana-related businesses’ but does not define what those businesses are. The general consensus seems to be that it applies to those businesses that deal directly with the plant in some way, such as growing or retailing. However, it’s a challenge that continues to haunt banks and there have been discussions and requests for Congress to address this issue.”

Congress, however, has not made much progress. Committees in both the House and the Senate rejected amendments over the summer that would have protected financial institutions from prosecution for working with cannabis accounts. A few pieces of standalone legislation have gained co-sponsors in Congress, but so far have not been scheduled to move forward.

The ABA survey seeks to gather input from its many members, perhaps as armor for its arguments as the bankers’ group seeks clarification, and protection, for its members in the fast-growing cannabis sector. By understanding the specific operational struggles that this “classic conflict of laws” has created, it can better lobby for regulations that will allow banks to work with cannabis-related businesses, providing the loans and merchant accounts they so desperately need.